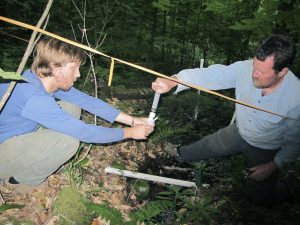 These patches act as hot spots for microbes that remove nitrogen from groundwater and return it to the atmosphere, researchers from several institutions, including Virginia Tech, report in a leading scientific journal.

The discovery provides insight into the health of a forest. Nitrogen is an important nutrient for plant growth and productivity, but in streams, it can be a pollutant.

“The importance of these fragmented patches of saturated soil and their role in the fate of nitrogen in forested watersheds has been underappreciated until recently,” said Kevin McGuire, associate director of the Virginia Water Resources Research Center based in Virginia Tech’s College of Natural Resources and Environment, co-author of a November article in the Proceedings of the National Academy of Sciences.

“We were able to determine the importance of denitrification in patches of shallow groundwater, which have largely been overlooked control points for nitrogen loss from temperate forested watersheds,” McGuire said.

Most nitrogen is deposited by rain. Temperate forests receive much larger inputs of nitrogen from the atmosphere than they export to streams. Once nitrogen leaves the forest in streams, it can become a water pollutant.

“In some ecosystems, there have been long-term declines in stream water export of nitrogen when inputs have remained elevated,” says co-author Christine Goodale, an associate professor of ecology and evolutionary biology at Cornell University.

“Understanding the fate of this nitrogen has been a challenge because denitrification — a gaseous loss of nitrogen to the atmosphere — is notoriously difficult to measure,” said co-author Peter Groffman, an expert on denitrification at the Cary Institute of Ecosystem Studies.

Denitrification removes nitrogen from water and can therefore improve water quality in downstream lakes and estuaries.

However, nitrogen is also an important nutrient for plant growth in the forest so removals of nitrogen by natural processes can reduce the productivity of the forest.

The research, led by Sarah Wexler while she was a postdoctoral associate in hydrology and stable isotope geochemistry at Cornell University, took place in the Hubbard Brook Experimental Forest in the White Mountains of New Hampshire, where the atmosphere annually deposits five to seven pounds of nitrogen per acre.

McGuire, also an associate professor of hydrology in the Department of Forest Resources and Environmental Conservation, led another National Science Foundation-funded project at the site, which developed an organizing framework to describe and map variations of soil in the watershed that explain shallow groundwater occurrence and frequency.

Groundwater wells from this earlier study were used in the new research to monitor soils that may have had the right conditions to function as hot spots for denitrification.

At sites throughout the forest, the research team measured the presence of nitrate, a form of nitrogen that is highly mobile and reactive in the environment, determined whether the nitrate is a result of atmospheric deposition or microbial conversion, and discovered that there is nitrogen loss to the atmosphere.

“We were able to differentiate sources of nitrate and show that some of the nitrate was lost to the atmosphere by looking at nitrate at the atomic level, that is, at the isotopic composition of the nitrogen and oxygen in nitrate,” said Wexler, who is now at the School of Environmental Sciences at the University of East Anglia in the United Kingdom. “The isotopic composition of nitrate provides a natural way to directly track the details of nitrogen cycling.”

McGuire said, “Some work remains to be done, but the aim is to be able to develop a better sense of where and how nitrogen is processed in the environment and be in a position to predict how changes in climate, for example warmer and wetter conditions, affect nitrogen cycling and water quality in forested ecosystems.”

The College of Natural Resources and Environment at Virginia Tech, which consistently ranks among the top three programs of its kind in the nation, advances the science of sustainability. Programs prepare the future generation of leaders to address the complex natural resources issues facing the planet. World-class faculty lead transformational research that complements the student learning experience and impacts citizens and communities across the globe on sustainability issues, especially as they pertain to water, climate, fisheries, wildlife, forestry, sustainable biomaterials, ecosystems, and geography. Virginia Tech, the most comprehensive university in Virginia, is dedicated to quality, innovation, and results to the commonwealth, the nation, and the world.