Nearly half of the nation’s electricity comes from coal. Coal mining plays an integral role in the economy and culture of far southwestern Virginia and throughout the Appalachian coalfields. In recent years, developments in mining technology and economics have led to an expansion of the scope and scale of surface coal mining.

It also has generated significant attention on coal mining’s potential impact on water quality. One of the practices receiving particular attention is mountaintop-removal mining and associated valley fills, in which headwater streams are filled with rock, soil, and other debris removed to expose the coal.

As governments and industry seek new ways to protect water resources, theVirginia Water Resources Research Center at Virginia Tech has been conducting research on headwater streams affected by coal mining in southwestern Virginia. These efforts aim to provide scientific information to miners, regulators, and others involved in the debate surrounding mountaintop-removal and other forms of coal mining.

In March 2009, the U.S. Environmental Protection Agency (EPA) halted several mining permit applications to review the impact of such permits on water resources. Within months, the Obama administration announced an unprecedented interagency plan to reduce the environmental impact of coal mining. In April 2010 the EPA issued guidance to enhance protection of Appalachian water resources from mountaintop mining.

These and other developments have increased the focus on issues related to coal mining, including U.S. dependence on foreign oil, jobs, electricity prices, environmental impact, and community impact.

“With so much at stake, there is a pressing need to base policy decisions on sound science, including an improved understanding of the impacts of mountaintop-removal mining on water resources,” said Stephen Schoenholtz, director of the water research center. “This is why this research is so important.”

THE CLINCH AND POWELL RIVERS, A BIODIVERSITY TREASURE

In southwestern Virginia, the Clinch and Powell river systems have some of the highest levels of aquatic biodiversity in the world. The Nature Conservancy has classified these systems as biodiversity hotspots, containing the nation’s highest concentrations of globally rare and imperiled fish and freshwater mussels. Many headwater streams that feed into these systems are in active coal mining areas. The water research center is conducting its research in these and other coalfield locations.

Carl Zipper, associate professor of environmental science in Virginia Tech’s Crop and Soil Environmental Sciences Department and director of Virginia Tech’s Powell River Project, has worked in this area for 30 years. Zipper and Schoenholtz are co-supervising a project, funded by the Virginia Department of Environmental Quality, the Virginia Department of Mines, Minerals, and Energy, and the Powell River Project, to investigate links between total dissolved solids (TDS) and aquatic benthic macroinvertebrates, insects and other organisms that live on stream bottoms.

Those organisms form an important part of the food chain, especially for fish. Some also help break down leaves and other organic matter that enters the water.

“Without these critically important animals, the health of the entire ecosystem can be adversely affected,” said Tony Timpano of Christiansburg, Va., a graduate student in the Department of Crop and Soil Environmental Sciences. 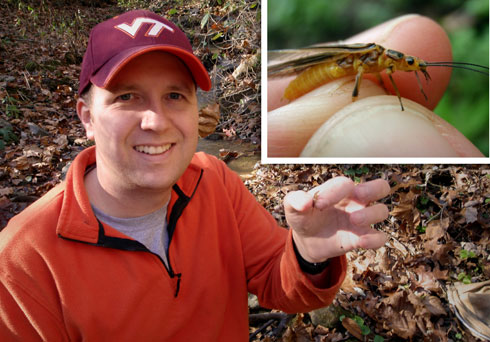 Virginia Tech graduate student Tony Timpano holds a juvenile Common Stonefly collected from a stream to determine the effects coal mining has on the health of the aquatic ecosystem.

The amount of total dissolved solids — or salts — generated by coal mining can have adverse effects on the health of the stream and the health of animals that live there, such as the stonefly. An adult stonefly is shown in the inset.

High levels of TDS, or salts, are often found in streams originating from areas exposed to coal mining, and benthic macroinvertebrates are a key indicator of stream condition.

“Simply put, the streams can become salty and inhospitable to some freshwater animals that normally call them home when TDS reaches excessive levels,” Zipper said.

Mining companies are mandated to mitigate the impact of mining activities on streams. To do this, many streams are reconstructed, either at the mining operation itself or in other locations damaged in the past. A second project, funded by Virginia Tech’s Institute for Critical Technology and Applied Science and the Powell River Project, is evaluating ecological functions in streams that were restored earlier. 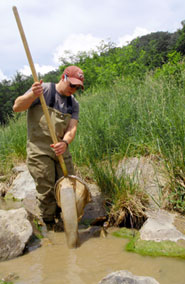 Efforts to restore stream structure and function after coal mining are relatively recent, mostly within the past five years. Questions have been raised about these practices, but little research has been conducted to answer them. Project researchers, including Robert “Trip” Krenz of Mendota, Ill., a graduate student in the Department of Forest Resources and Environmental Conservation, are investigating the effectiveness of mining companies’ restoration efforts.

“Structure and function are both critical components of an ecosystem. We are looking at both these factors to determine how they are related and to get a more complete picture of the condition of these streams,” Krenz said, “If the bugs are thriving and carbon is being processed, that’s a good indication that we’re on our way to a healthy stream.”