Skip to content
Home News VWRRC: The Environmental Impacts of Using Switchgrass as a Biofuel

VWRRC: The Environmental Impacts of Using Switchgrass as a Biofuel

Fossil fuels, the current main source for gasoline, originate from ancient decomposed plants and animals contained in the Earth’s crust. Biofuels, however, are made from plants grown today.

Biofuels are a renewable source as harvested crops can be replanted. They also promise new markets for farm products and potential economic sustenance for rural communities.

Biofuels are increasing in popularity because of oil price spikes, an increased need for energy security, and concern over greenhouse gas emissions from fossil fuels.

THE CALL FOR RENEWABLE BIOFUELS 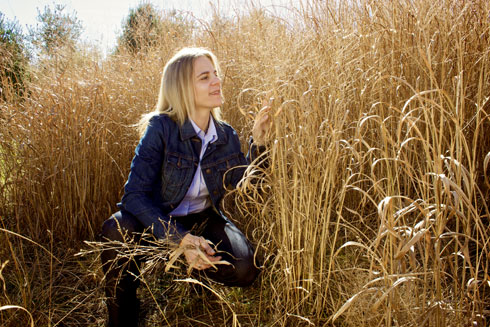 In 2007 the United States government mandated the annual production of 36 billion gallons of renewable biofuels by the year 2022 in the Energy Security and Independence Act. Of these 36 billion gallons, 16 billion must be cellulosic. Sheila Christopher, a research scientist with the Virginia Water Resources Research Center, explained, “Cellulosic biofuels are made from stems, leaves, stalks, and trunks of plants, none of which are used for food.”

Using switchgrass as a biofuel could reduce erosion and would not affect the world’s food market, among other benefits, scientists say.

Corn-based biofuels, or ethanol derived from the fermented sugars in corn, are the most prevalent biofuels today. Corn-based products are more competitive within the food market, causing an increase in food prices. Corn-based ethanol production also can have negative impacts on the environment.

Corn production requires large amounts of nitrogen fertilizer, which can pollute into groundwater. Excess levels of dissolved nutrients such as nitrogen and phosphorus can cause over-productivity in bodies of water when aquatic plants decay and lead to oxygen shortages. Another side effect of corn-based ethanol is the high amount of water required for corn production, straining an already-limited resource.

In reiterating federal initiatives, water center Director Stephen Schoenholtz said: “There’s a great need for alternative energy sources and for understanding all aspects of their environmental consequences, both beneficial and harmful.” Through the study, the water center is examining one of those sources. 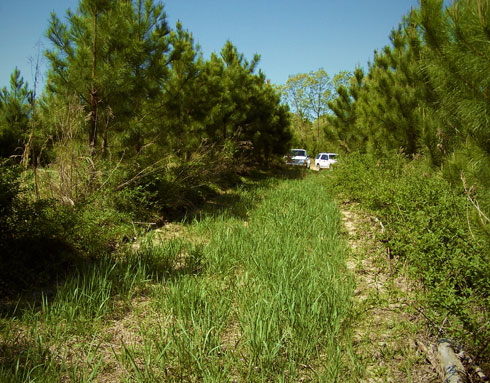 Switchgrass grows between rows of pine in one of three plots planted for the study.

The main goal of the study, Christopher said, is to find an answer to the question, “How can you grow cellulosic biofuel sustainably from an environmental quality perspective?” The center is specifically looking at switchgrass and combinations of switchgrass and loblolly pine.

The study uses computer modeling of potential hydrologic effects of growing switchgrass and loblolly pine. Christopher said she works with predictive models to assess how integrating switchgrass into pine plantations would affect water quality and quantity.

Switchgrass grows between rows of pine in one of three plots planted for the study.

To make the study possible, the water center collaborated with colleagues at North Carolina State University, the U.S. Forest Service, and Catchlight Energy, a joint venture between Weyerhaeuser Co. and Chevron. Catchlight Energy and the U.S. Department of Energy are funding the study.